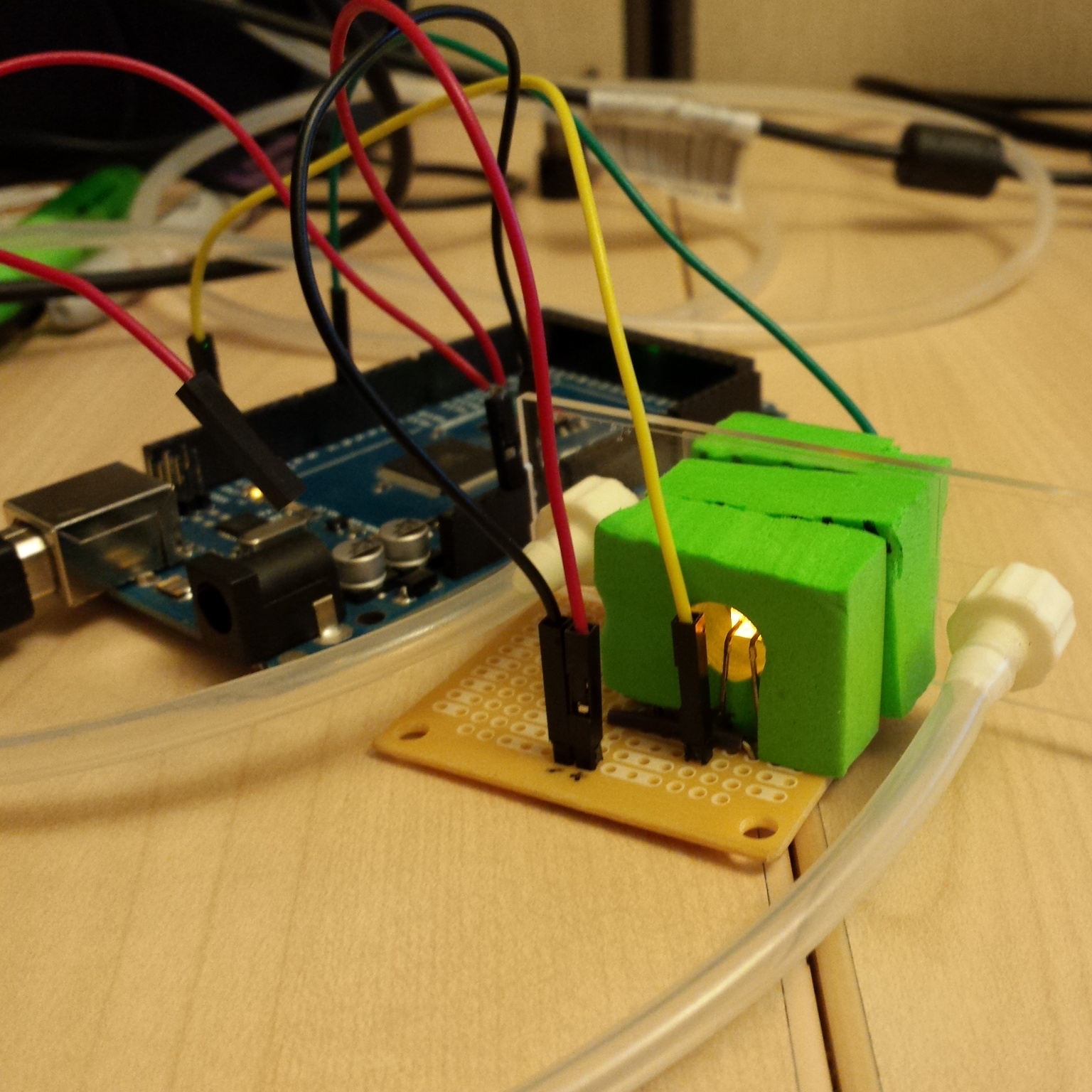 While building a mini bioreactor I thought it would be cool to have a personal spectrophotometer to monitor the culture density over the life of the culture. I was inspired when I saw a product from Ibidi for doing live microscopy in an aseptic, optical grade flow cell with luer lock fittings on the inlet and outlet. Boom! A disposable flow cell solution for my mini spectrophotometer system. They are offered in different flow chamber thicknesses and even surface coatings for adherent cell growth, but for a yeast or bacterial culture I opted for the untreated or non-functionalized chamber. 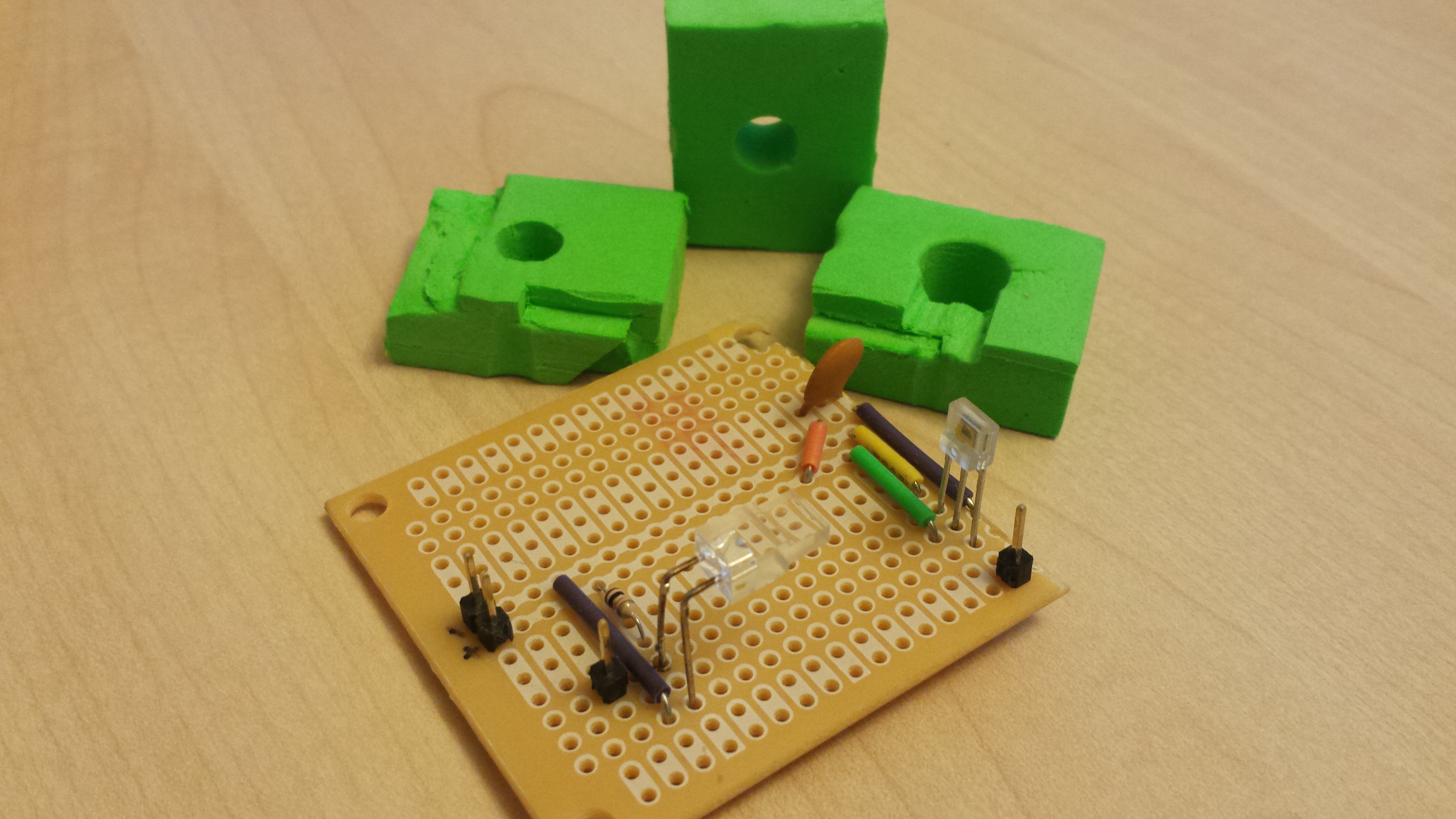 On a scrap pcb I rigged a light to frequency converter from sparkfun.com with a 0.1uF capacitor, powered by the 5v from an Arduino, and for the light source I used a LED that emits about 600nm light, and to cut down on background light I even cannabilized a goldbio.com floatie to act as the light chamber (I may have also won an award for it here). The code is pretty simple, turn on the LED, pump the culture through sterile peristaltic pump tubing and through the flowcell (pump activation time depends on the length and volume of tubing), measure the amount of light that is transmitted through the culture, compare the reading to known values, and pump the culture back into the spinflask or bioreactor. As nanodrop spectrophotometers exemplify, you don’t have to have a big cuvette with 1cm wavelength to take an A595 reading. Beer’s/Lambert’s law is dependent on the pathlength, so the math in the code depends on the chamber thickness of the ibidi slide. Or it is somewhat irrelevant because it will all be calibrated with known culture concentrations that have been measured with a true spectrophotometer.

Peristaltic pumps are pretty easy to come by (adafruit, ebay, etc). I love the availability and functionality of pharmacia P-series pumps, but I can’t get the full functionality that is suggested in the spec sheets. Through a 15pin din connector you should have the ability to engage the motor, change the flowrate, and even change the directionality of the pump head, but admittedly I can only get an arduino to turn them on and off. I need some more time to tinker with the communication, but I suspect it might require 5-20mA communication, as that seems to be the industry standard for PLC controlled instruments. On the open end of the peristaltic pump tubing beyond the slide/flowcell, I put a hydrophobic 0.45 micron sterile filter. The tubing can all be autoclaved with the reactor vessel, and then aseptically put on a sterile ibidi flowcell and place into the LED/sensor assembly.

I’ll dig through my backup drives to find the code, but I must have archived it a while back. For what it’s worth, I used the basic DS1307 real time clock code to keep time, used the TSL235R example code to pull the signal, sampled on a set interval, and then datalogged the values onto a micro SD card through an ethernet shield on an Arduino Uno. I was happy with how it turned out, and that GoldBio thought my alternative use of their floatie was pretty cool!