I like to surround myself with people who push me. I also like friends that make me want to be a better person. Recently I had the chance to join an adventure that would surely push me, and I would be surrounded by good friends. And if we pulled it off, it would be a memorable trip…

The idea: To ride a bike from the lowest point in California, to the highest peak that you could ride a bike. Starting from -285′ below sea level at Badwater Basin in Death Valley, and riding to 14,252′ at the top of White Mountain some 210 miles away. It would be a total elevation change of 14,537′ with a total ascent of over 22,000′. On top of that, the best window to make the summit called for doing the ride in under 24 hours, or we would be coming down the mountain in the dark. The plan was ambitious to say the least, but my friend Jeremy was up for the task. Having recently completed the Death Ride and a Double Century in 100+F heat, if anyone could do it then he could. At 190 pounds, I’m not a stellar climber on the bike. But I was excited to join the adventure to support him however possible. 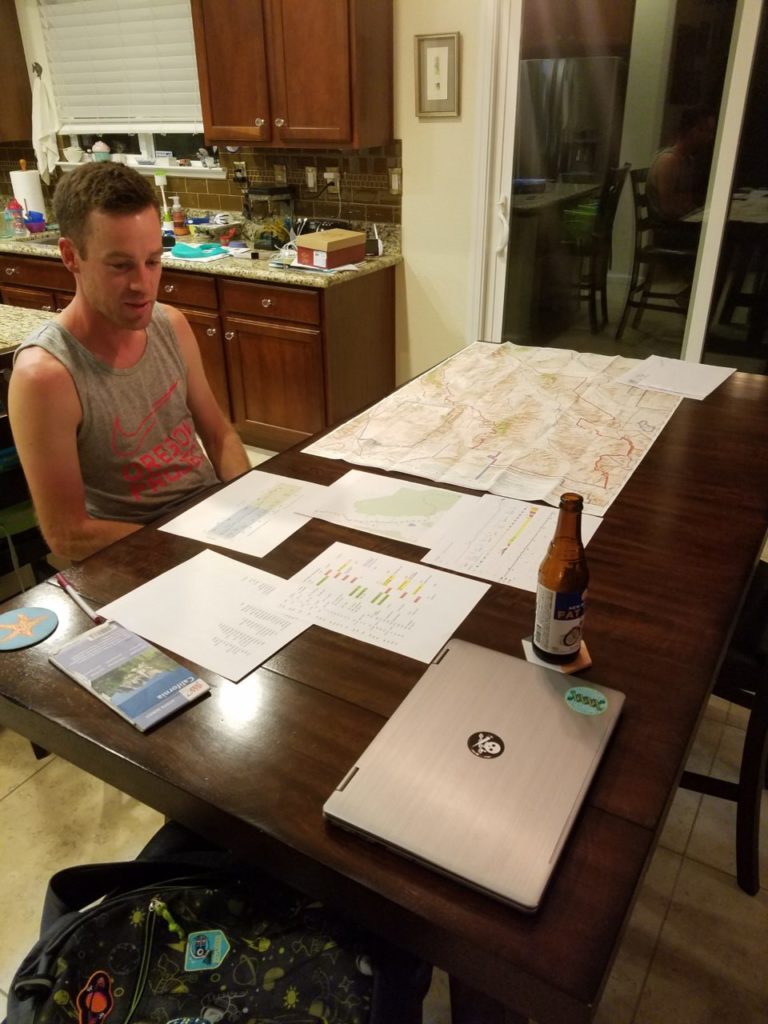 Planning: September was the optimal month for the trip, as the high temperatures in Death Valley were bearable, but it is also before the snows begin on White Mountain. We picked a date that we were both available, and put it on the calendar. I rounded up an old buddy that was my wheelman during grad school,knowing that he is always up for a challenge. I also convinced my new colleague that it would be an epic weekend of bikes and the beautiful Eastern Sierras.

As the date approached we closely watched the weather. The high temperature in Death Valley was only 100F, which was pleasant compared to the 120F just a few weeks earlier. And despite a chance of some flurries on the mountain, the weather looked solid. We borrowed a Sprinter van / RV to act as the sag wagon for most of the trip, and I set up my Sportwagen with 4 bike racks to get us up the gravel road to the summit gate, and back again.

The date arrived, and we were off. 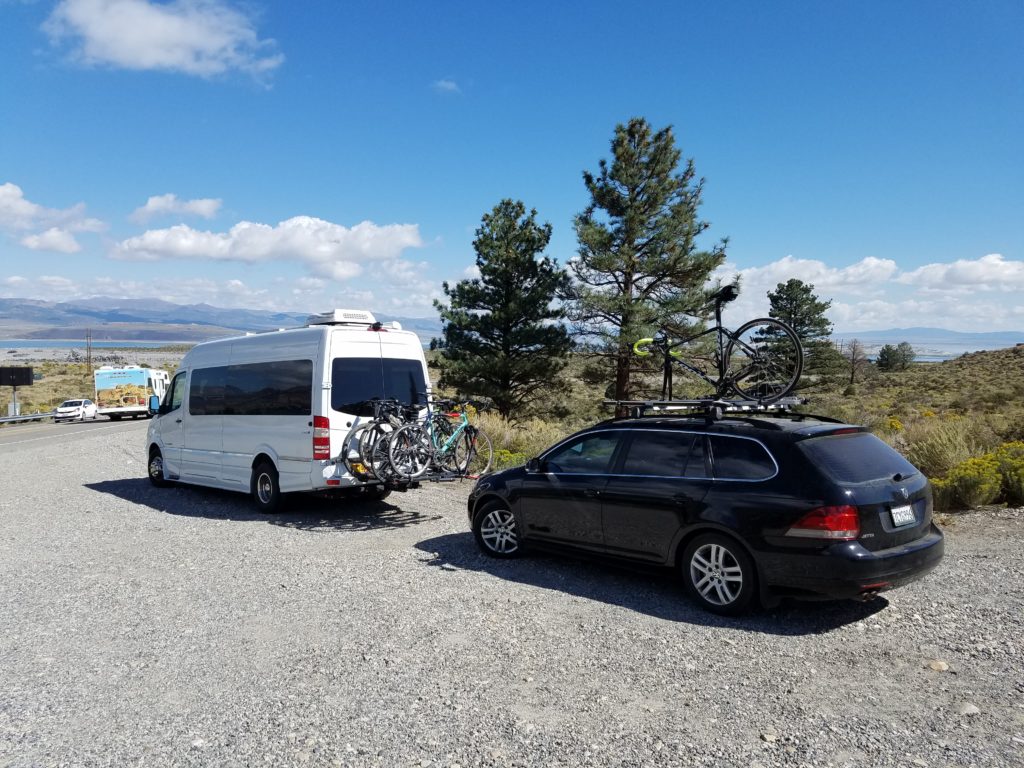 Our start in Badwater was uneventful, and the heat wasn’t as bad as we thought it would be. I rode with Jeremy for the first 17 miles, as we snapped a number of selfies and took in the beautiful landscape of Death Valley. 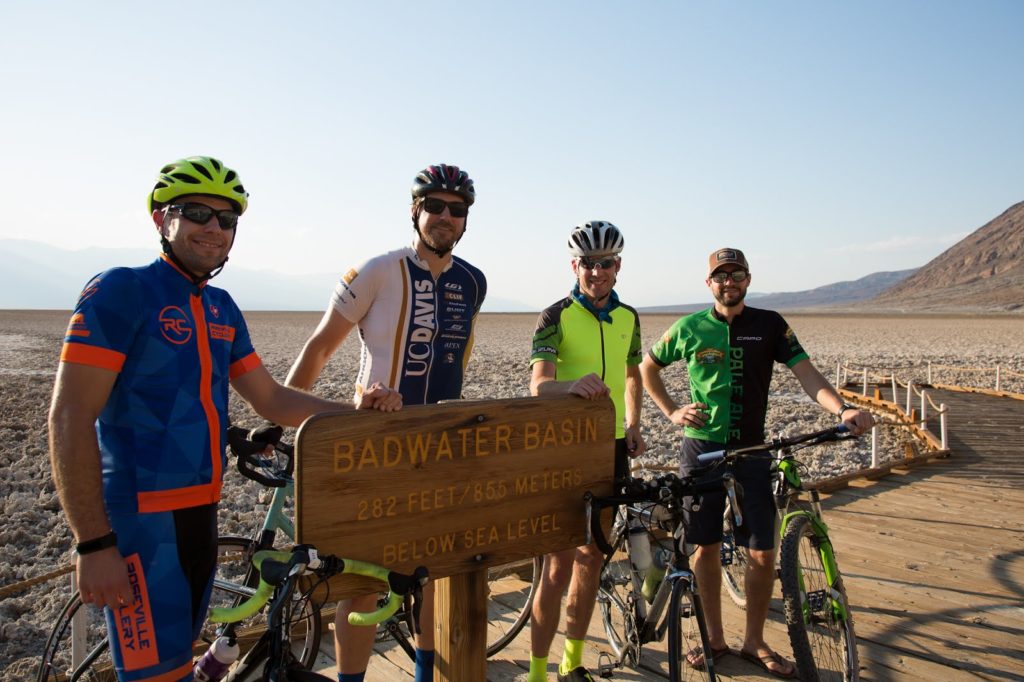 We started around 6:00PM, and what happened in the next 12 hours was somewhat of a blur. For the flat sections, Dave and I traded off accompanying Jeremy for mental and physical support. Tyrel hopped on his mountain bike and rode with Jeremy for a questionable descent in the middle of the night.

Otherwise we tried rotating through the riding, driving, and sleeping duties as best we could. I recall driving ahead of the riders into Independence, CA, where I found a place to park that they could see the van. Then I was sleeping in the front seat of the sprinter van, only to be woken up by the voices of Jeremy and Dave. In a total brain fog, I hurriedly gathered my cycling helmet and gear and got on my bike for the next leg. Riding through the night was brutal, but quite an experience.

As we rode the 80 relatively flat miles from Keeler to Big Pine, a headwind seemed to keep our speedometers at 14mph. We kept thinking that “this was supposed to be the easy section!”, but we soldiered on. Once we hit Big Pine, we picked up the second car and headed into the hills. Jeremy rode solo up into the hills, and we leapfrogged with the cars to try and give him aid stations and support along the way.

In seemingly no time at all, we made it to the Ancient Bristlecone Pine Forest, or the end of the pavement on our journey. Jeremy had rocketed up the hills, a sign that he was feeling good and pushing on. At this point there was 18 miles of a dirt/gravel road, and then the final 7 miles beyond the gate and up to the summit. Tyrel only has a mountain bike, so having only done the big mid-night descent, he had fresh legs and was ready to ride. 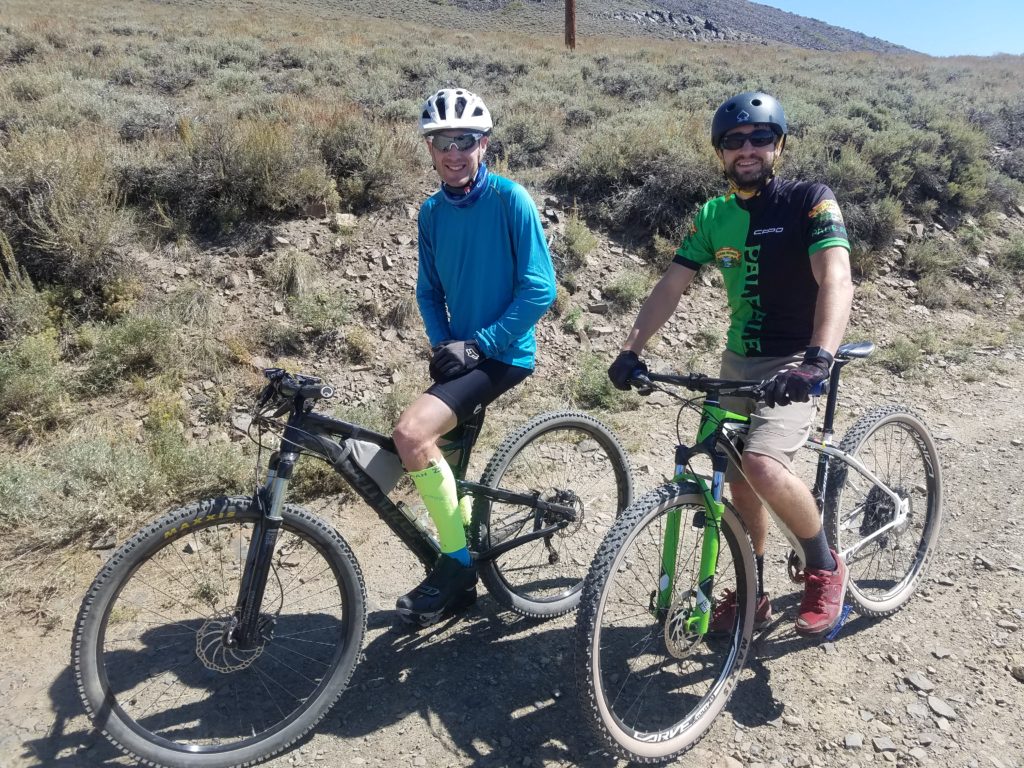 The 18 miles of dirt road was challenging, and the 20 hours of riding was taking a toll on Jeremy. We kept offering food and beverage options to him, but it was clear that he was struggling to eat enough. We pushed on, and eventually made it to the gate.

Energized by being only 7 miles away from the summit, we had to give it a shot. For the final summit push, all four of us would ride our mountain bikes up the rough and rocky trail. Having to leave the car behind at the gate, we also had to be self-sufficient with our food, water, winter clothing, emergency supplies, and lights for possibly descending in the dark. I bundled up, threw on my backback of gear, and we headed up the mountain.

Jeremy and Tyrel were riding surprisingly well, and they were up around the corner from Dave and I. When we turned the corner, we saw Jeremy on the ground and just knew that something wasn’t right. He was falling apart, and to use the athlete’s term, he had “bonked.” I tried getting him some food, anything that sounded good to him. A fig bar and some gatorade. I was hoping that he just needed a pick-me-up and we could continue on. After a few minutes it seemed to be working, and we decided to walk our bikes up to the next level spot up the trail. We had come so far, and the summit was so close, but we all knew that it wasn’t worth risking our safety or our lives for the trip.

The question that decided our fate: “If you push to the top, are you going to be able to make it back down?”  Any answer other than yes was not acceptable. After a hesitation, we decided to turn back.  We took pictures, we shook hands, hugged, and cried. It had been such a long journey with very little sleep, we were looking forward to getting off the mountain in the daylight and getting a good meal.

Getting off the mountain ended up being a shenanigan with the Sportwagen, loaded up with four guys, bikes, gear, and a really terrible road. The poor clearance was one issue, but the road was so terrible that it was rocking the bikes on the top of the car so badly that we broke t-slot bolt and a couple of bikes came loose. This made the drive back to the Ancient Bristlecone Pine Forest parking lot quite sketchy and memorable…

We will go back. Maybe not for a solo attempt, but definitely for a team relay event where we all contribute to the early miles, and then all ride together to the summit. I started out not knowing anything about White Mountain, and now I have an intense desire to go back and finish what we started.