For my first blog post I have chosen to write up a project I did very early in my startup days. The theme of this post is that biotech shouldn’t be so dang expensive.

While setting up a molecular biology lab for a startup biotech, I was shocked at the industry prices on equipment and reagents, something I took for granted while still in academia. Nowadays I am better at vetting Ebay sales for used equipment, but at the time I thought there were two options: new or homebrewed. So I made a simple 120v DC power supply to run SDS-PAGE gels for about $20 in parts. I think you could probably get the parts down to about $10 per power supply.

Disclaimer: I am a biochemist, and not an electrical engineer or someone who designs electronics for a living. Electricity hurts. This post is meant to be informative, but not fully instructional. Use this information with extreme caution, and don’t blame me if you shock yourself or catch something on fire!

So it all started when I needed another power supply to run my SDS-PAGE protein gel system. I didn’t want to buy an expensive power supply because I just couldn’t justify spending hundreds of dollars for something I wasn’t going to use much. So in the early days I used alligator clips to tap into the leads from my BulldogBio DNA agarose gel box. This was pretty sketchy, so after a few runs I decided to open up the power supply and see what was inside. I saw only two switches, a fuse, and an electrical component that was new to me. After googling the writing on the module I learned that it was a Bridge Rectifier- basically a big rectifying diode setup that can convert the AC into a choppy DC supply. The Bulldog power supply obviously worked well for running gels, so I didn’t think that the rough DC signal was a problem. Inside the BulldogBio unit there was also a switch to switch the negative/ground to the electrophoresis rig between the true AC ground and the (-) leg of the bridge rectifier (I think this is how it switches from +60vDC to 120vDC), but I didn’t implement that in my power supply (yet). So I pieced together the parts, built the power supply and it worked! 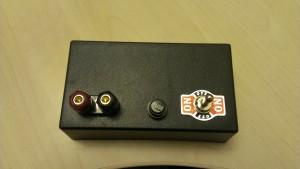 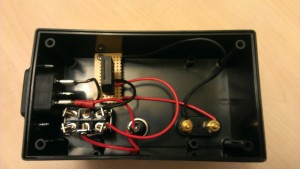 Bill of materials:
Electronics enclosure of your choosing
120vAC Power Inlet (and a cord- or just run the cord into the box)
Double Pole Single Throw (DPDT) switch rated to >5A AC (I used a DPDT switch I had laying around)
Fuse holder and quick burn 1A fuse (you can get one built into the power inlet also)
Bridge Rectifier (I bought an overpriced one from Fry’s)
Banana Plug Terminal
A scrap piece of proto board that I had to drill out to fit the big terminals of the bridge rectifier
Some scrap 20ga wire and blade fittings
Solder and iron to connect to the fuse holder and power terminals
Heat shrink tubing to cover the naked power terminals (I didn’t, but I would next time)

I’ll try to sketch out a schematic when I have a moment- or maybe a Fritzing diagram if I’m feeling saucy.